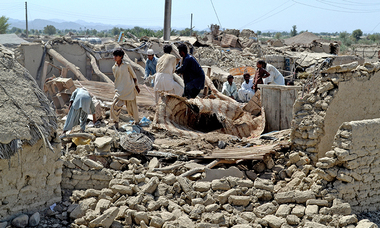 It was around 4.30pm on Tuesday when the first shock sent the terrified residents of Balochistan out of their homes and workplaces. That was more or less routine for people living in Balochistan. But, when the jolt shook the ground thunderously the second time they knew it meant disaster.

Faizullah Baloch, a truck driver, was resting in his mud house in Tarteej village of Awaran when the earthquake struck. The first jolt levelled his house to ground, burying five members of his family. “I am not the only one in Awaran grieving the loss of family members; most around me are in the same situation,” he says with tears in his eyes.

In a conversation with TNS on phone, a woman based in Awaran recalls, “My daughter-in-law was busy cooking food in the backyard of the house while I was praying inside the room. Suddenly, the house started shaking and in no time it collapsed. I could hear my grandchildren scream… Then I fell unconscious”.

Most of her family members escaped death, except a sister.

The thoughts of the earth shaking and children screaming do haunt her, but the aftermath, she says, is “dreadful. We have no shelter, no food and are living under the constant threat of another jolt”.

Awaran, the least developed district in Pakistan according to the Human Development Index, has been the worst hit area by the Sept 24 earthquake.

“Around 80 per cent houses in Awaran town have collapsed while the rest of the 20 per cent are unliveable. It is a town of around 70,000 people and almost everybody is shelter-less,” says Zahid Ali Baloch, a social worker from Awaran town who had helped bury more than 85 bodies till the filing of this report.

Almost 60 out of 85 buried so far in the town of Awaran were women and children. “People are busy digging graves. We couldn’t bury bodies for two days after the earthquake because of shortage of shroud,” he says.

He estimates more than 1000 people have lost lives in Awaran town.

Baloch says people need shelter, food and drinking water urgently. “People in rural areas depend on wells for drinking water. But, here, most of the wells have been destroyed. People have no other source of drinking water available. Most people are living in makeshift shelters made with sticks and cloth sheets”.

The level of disaster, says Baloch, is much higher than the response it has generated so far.

Dr Noor Bakhsh Baloch, a medical superintendent of District Hospital Awaran agrees with Zahid Baloch. “It would take a few days to really assess the final death toll. But safely it would not be less than 700, while thousands have been injured,” he says.

Hospitals are in a state of absolute chaos. “We need heavy-duty ambulances to bring the injured to hospitals from far-flung and hilly areas. We need more doctors and medical supplies,” he says.

Awaran district has an estimated population of around 300,000, scattered over an area of more than 21,000 square kms. Nomads comprise about 50 per cent of the population. Vast stretches of land are underdeveloped. Awaran is the only town in the district that offers some basic amenities.

Awaran is considered to be one of the most sensitive and troubled districts of Balochistan. It is the hometown of Baloch guerrilla commander, Dr Allah Nazar Baloch.

“There is only one hospital in the district with three out-of-order ambulances and less than 10 doctors,” says a senior government official of Awaran district on condition of anonymity, adding, “There were only three doctors in the district on the day of the earthquake. There were no medicines available. Many people died due to delayed medical aid while several others were buried alive under debris. There is not a single bulldozer, excavator or loader in the district. People are still recovering bodies from the rubble. Several villages have been completely wiped out.”

The district is one of the most vulnerable in Balochistan and it is placed in the seismic zone-3. The authorities are well-aware of the situation as 2012 monsoon contingency plan of the province reads that the district has been hit thrice by massive earthquakes in the past. It has also been marked as ‘high’ on flood vulnerability chart of the plan.

As tested by last week’s devastation, the level of preparedness to fight natural disasters is shockingly low in the district — the government appointed DG of PDMA only after the quake hit the province. District Disaster Management Authorities (DDMAs) in all districts of the province are very active on papers but have nothing to show on ground.

The situation is not different in other parts of the affected areas. Tehsildar of Hoshab sub-tehsil of Kech district tells TNS that 44 have died while 180 injured in the district. “We do have enough doctors, medicines and food but have no equipment to dig up the debris of collapsed buildings. It would take at least a week to get machinery here from Quetta or Karachi. We hope that nobody is stuck in the debris alive,” he says.

Even days after Turbat, Awaran, Panjgur, Chagi, Khuzdar and Gwadar districts of Balochistan were struck by the earthquake of the 7.8 magnitude on Richter scale, the government agencies are unable to assess the magnitude of destruction.

Quetta and some other parts of Balochistan fall in a seismic zone and have been rocked by earthquake on several occasions. The worst incident was in 1935 when over 35,000 people were killed.

Because of the frequent earthquakes, there is a restriction on construction of high rise buildings in Quetta. But, several multi-storey buildings and plazas have come up in the city in the last two decades. In the wake of every major earthquake, the residents of Quetta demand of the authorities to take cognizance of the violation of Quetta’s building control regulations. Otherwise, they fear that a major earthquake may repeat the history of the devastation caused by 1935. Courtesy: The News